History of the french hunting horn

Coursing, or big game hunting, has been practised for two thousand years on our land; animals coursed include red deer, fallow deer, roe deer, wild boar, bear and so on. However, hunting in the beginning was a lot different from its modern day practice. Ancient forests were not well laid out; thus they were very hard to access, if not impossible to penetrate. Hunters would cordon off a sector with nets, or by placing guards in key exit points; then they would unleash the hounds to drive prey towards the spots where the hunters were awaiting them. There was almost no limits to the pursuit, and the catch was more often than not abundant.

During this type of hunting, signaling over distance was an essential means of communication to coordinate among the many participants. From close up, it was enough to shout; but further afield whistles or calling horns. These basic instruments consisted of a flared tube, which was slightly bended, and of 20 to 40 centimeters in length on average. They came in all sorts of materials: metal, animal horn, wood, boiled leather, etc. In proportion to the means of their owner, they could be very simple, or well ornamented. In the times of Charlemagne, the famous ivory horn of Roland was fashioned as a version for military parades.

During the Middle Ages, several terms were used to refer to these instruments such as   horn, trump, trumpet, cornet, etc. Despite their various denominations and forms, they could only produce one or two notes. In order to distinguish between the signals, variations of short and long notes were used in sequences, similarly to the morse alphabet not so long ago.

For example, in the 14th-century Book of Hunting by Gaston Phoebus, we find the following description for the “Horn Signal for a Request” (word = note):  “Blow a long note, then four short ones, followed by another long note, finally four short ones.” Another author of the same era, Henri de Ferrière writes about the kill: “All those who own one should blow the horn all together, and it will make for a nice melody.” Perhaps our ears are no longer accustomed to detect it, but it’s clear that these hunters had a musical sensitivity to these primitive horn signals, the precursors to the horn fanfares. 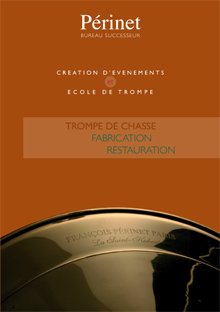